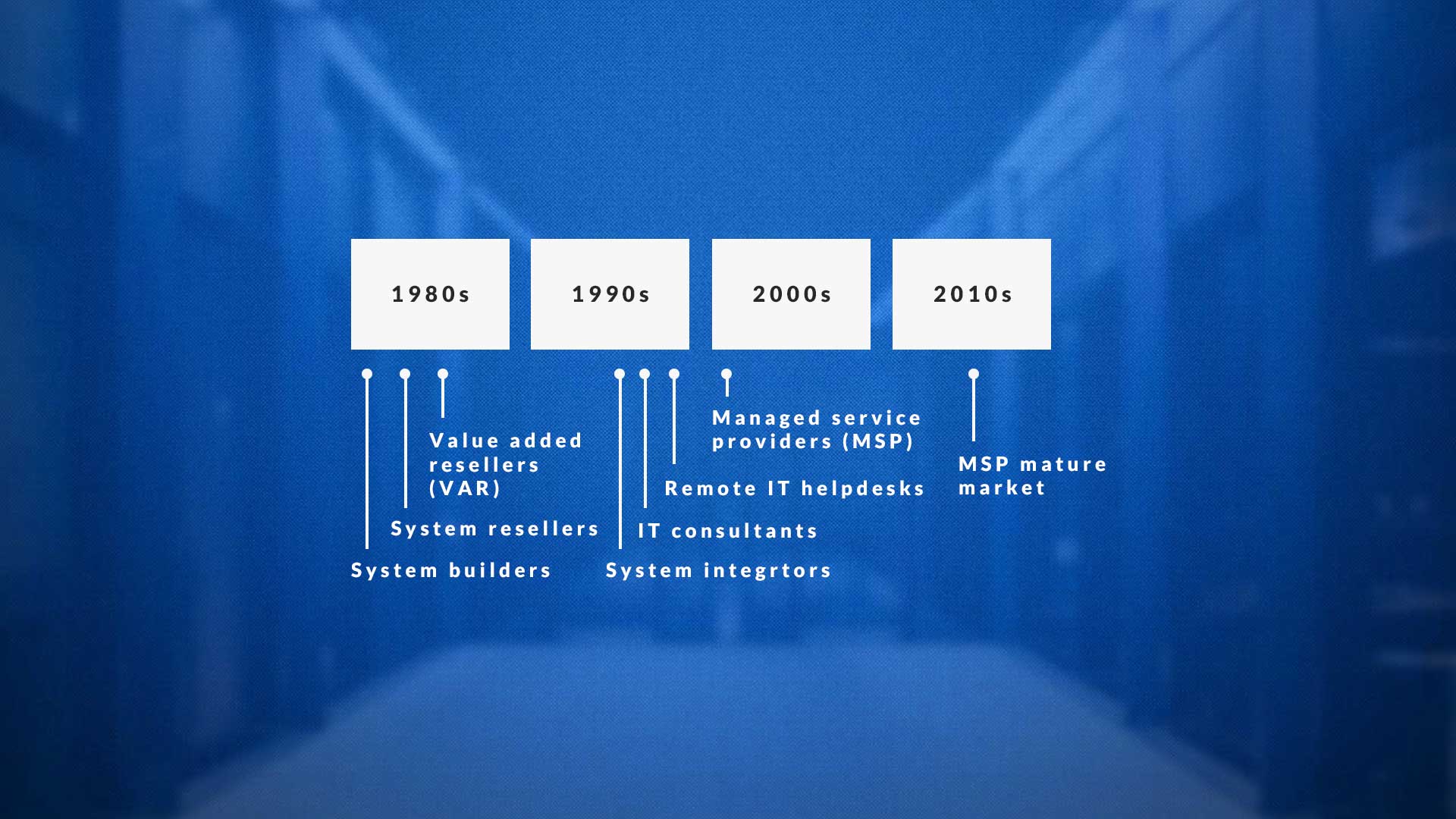 What Is an MSP: History of the Managed Service Provider

An MSP is an acronym for managed services provider, an IT services company that manages the IT infrastructure and IT processes for clients. Infrastructure managed ranges from user devices and computers, to firewalls, routers, switches, active directory, exchange servers, active directory servers, and data servers. They usually operate from a centralized software or technology stack of software to remotely monitor and troubleshoot. I've often described an MSP as the IT department for many companies. Other names for MSPs include Managed IT firm/vendor and IT Management Company. A synonym for an MSP is not an IT consultant, which I'll get into later in this article when we get into the history of the IT services space.

What is an MSP?

An MSP is an acronym for managed services provider, an IT services company that manages the IT infrastructure and IT processes for clients.

Size of business & industries best served by the MSP model

The MSP model works best for the small to mid-sized business (SMB) space, small being as little as 2 users and mid-sized as big as 500. Companies that are larger than 500, usually warrants for skilled in-house labor. That should include enough computer engineers with varying roles to cover all the bases. Any IT department worth their salt should have, systems administrator, troubleshooting engineers, project managers, chief information officers, etc.

Each of these roles are usually well covered in a typical managed services provider. Some MSPs even call their point of contact with their customers a vCIO (virtual chief information officer). Even so, it is the job of the CEO, CFO, and COO, no matter what the size of the company, to make sure that their MSP is held accountable. An MSP should provide proven results that optimize operational efficiency and improves the bottom line of the business; if not, they are usually not worth the cost nor liability.

MSP services are best for small to mid-sized businesses.

Companies with 20 to 100 employees are undoubtedly best served with an IT function operated under this model, especially companies in low tech industries such as legal, financial, engineering, architecture, non-profit, manufacturers, wineries, and city governments. High tech companies such as app and web developers, server hosting companies, audio/visual companies, etc. usually have a solid functional IT core. That affords them the ability to not have to outsource IT; however, some of these types of companies do.

The History of the managed services business model

Most sources will tell you that the Managed Services model sprung forth from a wave of new technology that made remote logging into computers possible in the 1990s. However, it goes further back than that. To understand the true history of the MSP industry, you need first look at the computer services industry as a whole, starting with system builders & resellers. This will help give you a better picture of the evolution of the MSP.

Computers were around in 1958 & Information Technology history goes back hundreds of years, when information started getting stored in systematic ways. However, we are going to skip forward and take a look at the pivotal events from the 1980s thru today that has shaped the Managed Service Provider business model.

In the early 1980s, the personal computer (PC) industry was just getting started. The IT services firms were calling themselves "System Builders." Many small regional firms sold what used to be known as 'white box' computers. They were known as system builders. Over time, large companies like IBM, Compaq, HP, Gateway, and Dell began building these computers for much cheaper because they had much better economies of scale than the smaller system builders. This drove down the price point of personal computers.

Many of these smaller firms found that their profit margins were better when they resold what the larger HP and Dell computer companies were producing. They moved away from building computers because labor was too expensive. The "Systems Reseller" era was born. And business was good. This was before the direct to consumer phenomenon that the Internet made possible. The larger companies needed these smaller companies to get their computers out to the regional market. CRN (Computer Reseller News) Magazine is still around today and stemmed from this era.

In the ‘80s and ‘90s, local IT firms needed a way to differentiate themselves even further, so they started "adding value" to maintain healthy margins. They offered installations of computers and troubleshooting in the first few months to a year as a value add. These were called VARs or Value Added Resellers. They would help your business get all set up and able to figure out more complex things, like how to make one computer talk to another. You will hear that term used a lot in the IT management industry.

In 1989 Tim Berners-Lee firmed up his proposal of the World Wide Web making the Internet, created seven years earlier, much more accessible and useful to small businesses. By the mid-‘90s, technology had become complex and capabilities to network computers were now possible. Companies found a competitive edge by making multiple computers talk to each other. By this time, almost all small businesses had an Internet connection and needed appropriate devices like switches, routers, firewalls, to make the entire IT infrastructure work together. The VARs started calling themselves "systems integrators."

By the late ‘90s, IT services became the dominant source of profit and differentiation in the IT industry. One system integrator would have a way of doing things that didn't work for a particular business. A small business might ask a systems integrator for a second opinion on their set up. This was the real shift when system integrators started stepping into advising on best practices for making technology work for business. Pretty soon, systems integrators abandoned the term and called themselves IT consultants.

Also, around the late ‘90s, Internet speed got to a point where computer programs (or applications) started being able to be deployed from a central place. This was the start of the dot com era, and companies were developing software that made it possible for IT professionals to connect to a computer and do things like remotely control and manage the computer. This allowed for IT professionals to trouble shoot from an IT help desk over the Internet. Some platforms made automation possible through scripts and customized coding. Several web apps could come together and solve problems in a streamlined way. Those solutions could be deployed to other customers by IT consultants that were using this sort of central connectivity.

The early 2000s was the start of the managed IT services industry. And many IT consultancies adopted the term managed service provider and filled their firm with a variety of computer engineers with a variety of skill-sets to complete a greater framework for IT than any IT consultant, or consultancy could do on their own. Endsight was founded right around this time in 2004. Today MSPs do most of these components from building and reselling systems to helping with IT strategy to managing networks and IT infrastructure remotely.

A lot has shifted since the founding of Endsight in 2004. Third parties that provide applications that help MSPs have come and gone. Best practices have emerged. By the 2010s, the managed IT services industry has become a mature market and the predominant business model of choice in the IT services space. On the surface, every MSP looks almost just like the next, but there are critical differences from one IT management company from another.

For example, take one small facet of business when it comes to the MSP business model: scalability. Many MSPs find it very hard to take on new clients, especially when that client is in the 200+ employee range. Why? It's because they are most suited to only work with small networks. Just the volume of support inquiries alone from a 200+ client is enough to make every other client suffer when the MSP is only a handful of people.

It's important to vet out the MSP when choosing which to work with, but there are some top questions you can ask when selecting an IT vendor, and we've included it in our report: How to select an IT vendor. You can get it here. 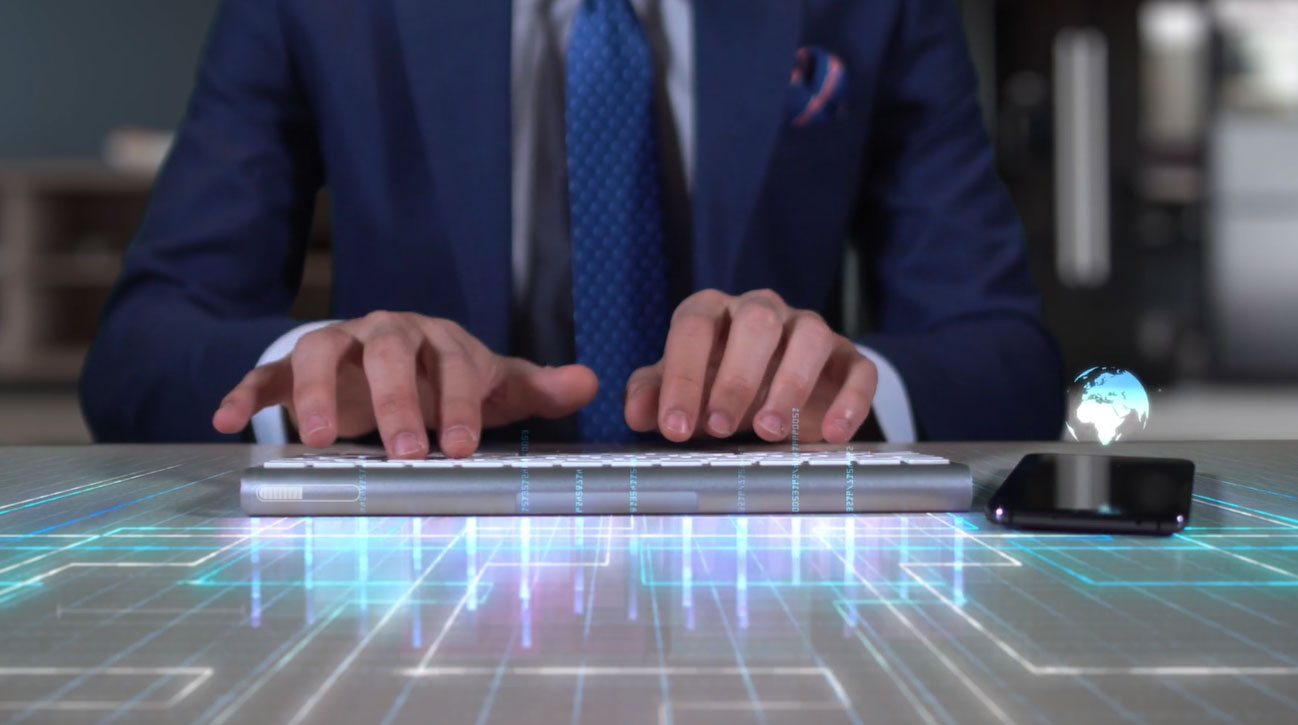 Cybersecurity Policies: Planning Can Save Your Business from Disaster

As an IT decision-maker, you understand the importance of being prepared for any potential cybersecurity threats. Unfortunately, many organizations wait until an incident occurs before creating an incident response plan, which can lead to costly and frustrating consequences. That's why it's crucial..

Let's face it, it is nearly impossible to function as a business without employing a variety of cloud services. Your critical business information resides and depends upon systems outside of your facility and control. This presents both business and technical challenges, including how to adequately..